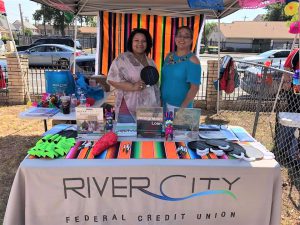 Many of the immigrants in San Antonio have money wired to them for bus tickets or airfare, but a lack of Western Union outlets near the shelter had created a problem. The two available outlets, both retail stores, only allocated a small amount of money to their Western Union operation. Only one family could be served in a day. This was creating a serious over-crowding issue at the shelter and was delaying families from being reunited.

The solution? A financial institution needed to step in and help. Jeff Ivey, President/CEO of River City Federal Credit Union, and Richard Keith, Human Services Administrator for the City of San Antonio, got together to come up with a plan to address the situation.

River City’s main office is only a ten minute walk from the immigrant shelter, and the credit union quickly engaged with Western Union to get their services set up. The City also provided transportation to the families that needed to get to the credit union.

"We already had an established procedure for working with ITINs, so it didn’t take our staff long to get comfortable with the government-issued IDs we were seeing from Mexico, Guatemala, and Honduras,” said Ivey. “We’re proud to be part of the City, and stepping up to help was a very easy decision for our staff and our Board. This effort is consistent with our mission statement, which states we believe that everyone has a basic right to affordable, sensible financial products, regardless of citizenship status.”

In addition to these services, River City offers ITIN lending and deposit services and focuses its efforts on the financially underserved and unbanked in San Antonio, which numbers over 12% of the two million people that live in the area.