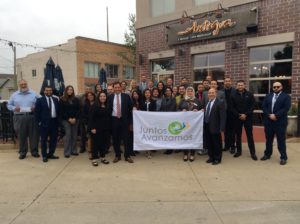 Juntos Avanzamos credit unions are committed to removing the barriers to financial inclusion. Barriers such as language, documentation, and underwriting criteria are common for underserved and immigrant people in the United States. Juntos Avanzamos credit unions have dedicated staff and developed programs and financial products to expand their community outreach. In doing so, they work to close the wealth gap and to address the challenges to financial equity.

Marine Credit Union, a Juntos Avanzamos designated credit union with headquarters in La Crosse, Wisconsin, is one of these credit unions. Founded in 1939 to serve the employees of Mercury Marine, the manufacturer of outboard motors, Marine has grown to 75,000 members in Wisconsin, Minnesota, Illinois, and Iowa with just under a billion dollars in assets.

Marine Credit Union believes a community thrives when all members experience opportunities for growth and stability. In 2015, Marine set out to create an ITIN loan program, with the purpose of expanding access to affordable and relevant financial programs and services to Hispanics and immigrants in the communities they serve.

“I came to Marine because they said we could work together to build an ITIN mortgage program, which we took live in October 2015, and which has proven to be a great success,” said Robertta Sumia Masoud, a Senior Mortgage Officer at Marine. She has been working to develop and expand Marine’s ITIN lending program since its inception.

Robertta’s interest and support for ITIN lending came from her own childhood experience. In her formative years, she became best friends with the daughters of Hispanic immigrants. “I shared so much time with them that, after a couple of years, I learned Spanish and felt like they were my family.” One day, when she was eleven, she asked the mother of her friends why they did not have a house of their own. She had seen the landlord yelling at the family. That was the first time she learned about their journey and how hard it was for them to have a house of their own. From then on, Robertta has been an advocate for removing the barriers to homeownership, regardless of immigration status. At Marine, she found an organization that shared her values and commitment.

Marine’s ITIN lending team is diverse, with staff members from different nationalities, ethnicities, and backgrounds. This diversity has also served to fuel the growth of Marine’s ITIN lending program and the credit union in general, as it has helped to gain the trust of the diverse communities it serves. Today, Marine has an ITIN loan portfolio of just under 800 loans, totaling $28 million. Of these, 250 are mortgages, making the dream of owning a home a reality for hundreds of its members. The availability of relevant and affordable financial products for all has attracted loyal and committed members. The delinquency of Marine’s ITIN lending portfolio is less than half of that of its non-ITIN portfolio.

“At Marine Credit Union, our mission is to ‘advance the lives of people from a place of financial need to a life of ownership and giving back in our communities,’” said Shawn Hanson, CEO of Marine Credit Union. “We are committed to advancing the lives of Hispanic people and immigrants in our markets throughout Wisconsin, Minnesota, and Iowa. We believe that everyone deserves the opportunity for a better financial future."