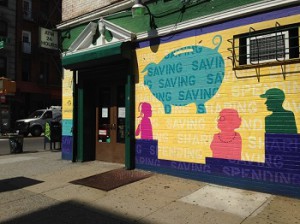 Lower East Side People's FCU (LESPFCU) has been the epitome of a community institution since its founding in 1986. The credit union's expansive field of membership has grown from its original branch in the Lower East Side neighborhood of Manhattan to include Central and East Harlem and low-income individuals and families in all five boroughs of New York City. The credit union serves a highly diverse, predominantly low-income membership; 70% of the credit union's membership is low income. The credit union has responded to the diverse needs of their members with an expansive menu of products and services. From credit builder loans, micro business loans and anti-predatory loans to financial counseling, multi-lingual services and no-cost tax preparation, LESPFCU has provided the accessible products and capacity-building services that cement the loyalty of 6,000 current members and draws new members to the credit union every month.

In 1998, LESPFCU became one of the first credit unions to receive CDFI certification. Since then, the credit union has received $4.4 million in CDFI Financial and Technical assistance awards, increased assets by $33 million, loans by $26 million and membership by 663%. CDFI technical assistance grants enabled the credit union to better serve their members through upgrades of computer systems, the introduction of new credit and debit products and the addition of ATM services, making it easier for their members to access the same services outside of their branch. Grants also provided the capital foundation for the credit union's rapid growth. The awards allowed LESPFCU to make more loans to individuals who are under banked, especially to members living in Housing Development Finance Corporation buildings (low income housing cooperatives) located throughout the city.

For Lower East Side People's FCU, CDFI certification has made both financial and symbolic contributions to their success; certification recognizes the credit union's original and ongoing commitment to their community-the core motivation for all community credit unions. For credit union CEO Linda Levy, credit unions that consider CDFI certification must deliver the products and services their members need. "It's not enough to say you want to serve an underserved community, or have a branch in an underserved community," says Levy, "you have to actually serve them- through lending, primarily, but also by designing products and services that fit the needs of the community." Lower East Side People's FCU does exactly that, and provides a proud example of how CDFI certification and funding can support expansion of products, services and benefits for the members and communities they serve.