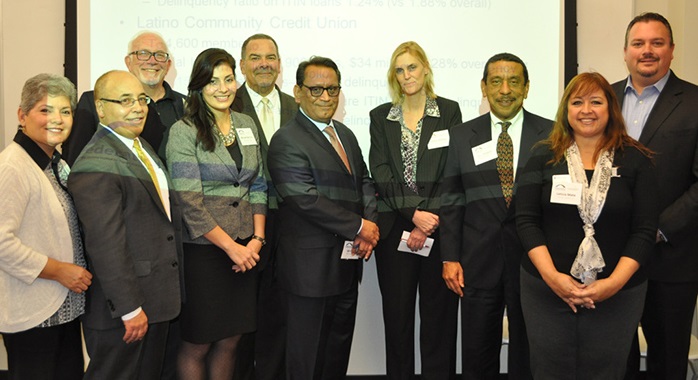 On January 16, 2015, Cathie Mahon, Federation President and CEO, Miriam De Dios, Coopera CEO, and Gary Perez, CEO of University of Southern California Credit Union, welcomed participants to the first Financial Inclusion for Immigrant Consumers Roundtable. Perez laid out the scope of the day's discussions, noting that of the 3.1 million immigrants living in California, 2.5 million are undocumented, making the city of Los Angeles a key strategic location for the launch of this large scale collaboration organized by the Federation and Coopera.

The roundtable officially kicked off with Mahon andDe Dios outlining the unprecedented opportunity presented by President Obama's recent Executive Order introducing Deferred Action on Parental Accountability (DAPA) and the expansion of Deferred Action for Childhood Arrivals (DACA). The Los Angeles roundtable is the first in a nationwide series to reach out to unbanked and underbanked immigrants and their families to link them with the safe and affordable products and services of credit unions. Said Mahon, "This is a huge opportunity for a large group of people who didn't believe they could enter the financial mainstream before. This will be life-changing." In her presentation De Dios described how DACA applicants were more likely to have jobs and to have access to bank accounts and driver's licenses compared to immigrants that did not apply for DACA.

Pablo DeFilippi, the Federation's Vice President of Membership, and De Dios also led a discussion about the industry's readiness to serve immigrants, emphasizing the necessity of developing a credit union culture that promotes inclusivity and fosters trust. The discussion helped to demystify the banking regulations surrounding documentation. Some attendees were not aware that financial institutions can accept alternative forms of ID, including the Marticular Consular, and that credit union accounts can be opened without a social security number, for example. A panel of credit unions presented on their experience in working with immigrants; a key lesson learned was that partnering with community agencies is a vital element to successful lending and risk mitigation.

First-district Councilman of Los Angeles Gil Cedillo was the keynote speaker of the roundtable and spoke of his affinity for credit unions; Cedillo's wife was once an employee of the Los Angeles Teachers' Credit Union, since renamed California Credit Union. An engaging speaker who provided a blend of facts and anecdotes of immigrants' experiences, Cedillo stressed the need for access to capital, ranging from small dollar loans that help cover everyday expenses to larger business loans. In Cedillo's experience immigrants thrive and become leaders in their communities when they have access and support.

Energy and enthusiasm levels remained high into the afternoon with presentations from Catholic Charities of Los Angeles and California, the Coalition for Humane Immigrant Rights of Los Angeles (CHIRLA) and the National Council of La Raza (NCLR) on how to leverage partnerships. Each organization presented pathways for credit unions to plug into the work that these organizations are already doing with immigrants at the local level. Various government agencies provided an overview of the efforts to promote inclusion for immigrants: Graciela Arreola-Munoz of the US Citizenship and Immigration Services provided an update on DAPA and DACA and emphasized the opportunity for credit unions to provide a safe and affordable alternative to the fraudulent offers prevalent in many communities. Consul Adriana Argaiz from the Mexican Consulate of Los Angeles stressed the importance of the Marticula Consular and noted that the processing time for this form of ID provides an ideal opportunity for credit unions to engage visitors on their products and services. Dr. Linda Lopez of the Mayor's Office of Immigrant Affairs of Los Angeles presented on the scope of the upcoming Cities for Citizenship program, a Federation partner and a model of public-private partnerships that credit unions can take part in as trusted partners.

The roundtable was packed with accurate, up-to-date information on the Executive Order and a learning lab to connect credit unions currently working with immigrants to those that have yet to begin serving this emerging market, as well as a networking opportunity. As the meeting drew to an end, participants agreed that credit unions, advocacy groups, government agencies and consulates have much to gain by working together to embrace immigrants as a vital, vibrant population within the US; the group plans to continue the conversation begun at the roundtable with monthly meetings. The Federation and Coopera thank the attendees for their participation and enthusiasm and are excited about the roundtable's plans for the future.