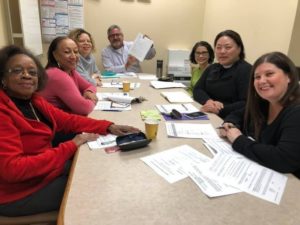 Picture of the board, picture with Barnes (member)

Since the Rodney King Riots in 1992, many things have changed in Los Angeles and across the country—and many things remain the same. While the United States has grown in ways that include electing its first Black President and then—just recently—Vice President, systemic racism still exists today.

Sparked by the riots, there was a shift in L.A. toward the need for easier access for fair and regulated banking options to assist people with little or no credit. Thanks to the establishment of Episcopal Community Federal Credit Union (ECFCU), which began serving its first members later that same year in the city’s Echo Park area—mere minutes from where the riots took place.

“It was an emotional start,” recalls Urla Gomes, CEO of the credit union since its inception. “It was obvious that a lot of problems existed within the lower-income African American communities in Los Angeles—and we had to figure out how to address them.” It was crucial to Gomes and local leaders to provide financial products and services in the best interest of the people—where absolutely none existed previously.

The credit union not only opened its doors to remedy the inaccessibility of safe, regulated financial services—it did so with compassion. ECFCU has compassionately welcomed and embraced everyone walking through its doors—those with credit and those without, those who are homeless or have physical challenges, members of the LGBTQ+ community, and people from all ethnicities. 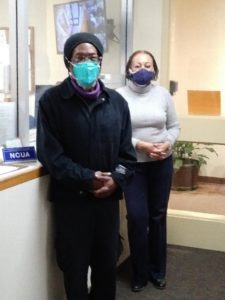 ECFCU is critical to a community with so many low-income residents. It has been especially important during the time of COVID-19 and the ensuing economic downturn—where members have suffered from mounting medical bills, reduction in work hours or loss of jobs. The credit union is predominantly essential to members in need of small emergency loans unavailable to them from larger financial institutions.

Gomes explains that the credit union rarely ever declines a loan—and if they do, it is only because an individual has abused their credit. Even in that case, compassion prevails. Where a big bank would simply send that individual on their way, ECFCU sees a learning opportunity.

“Still in that case we provide counseling in reference to what’s going on with their credit, their lives, how they are handling their current expenses,” Gomes says. “You can’t find a bank that will do that for you. That’s one of the great and unique services of our credit union. We are always there for the individuals and their families.”

While the credit union has worked hard to offer options such as online banking, bill paying, debit cards, financial education, and shared branching, it is because of their compassion that ECFCU goes above and beyond for their members. Day in and day out they are helping their members find affordable housing, directing them to reputable car dealers, helping them complete immigration and medical forms, and simply being there to—literally—hold their hands through an illness.

“There are a lot of really special things that happen at this credit union,” explains Gomes. “Our members know they can come to us. They feel safe coming to us. They tell what is happening in their lives, because they trust us, and we are there for them. We are a credit union for all people.”

Gomes says she believes the credit union industry can play a role in addressing the racial inequality felt by so many Americans.

“It starts with increasing credit union memberships—using statistics to find out which communities are lacking in sufficient banking options and getting branches in there to help,” she says. “We need to encourage all races to be part of credit unions—to become a more ethnically diverse community. We need to show everyone we are there to help, not harm.” 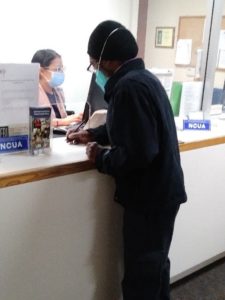 Only then, when all races are financially strong and when there are savings and credit programs available for everyone, can there be less of a racial disparity across the country, she says. Like Episcopal Community Federal Credit Union, “The industry itself also has to show compassion toward everyone,” according to Gomes.

It is out of compassion that James Barnes came to be a member of Episcopal Community Federal Credit Union. As a victim of abuse most of his young life, Barnes turned to drugs and alcohol to self-medicate. After being incarcerated for a period of time in the late 90’s, he knew he needed to take better care of himself and work toward building a better future.

Through his church he was advised to seek out ECFCU—which led to the discovery that improving his credit was a direct line to improving his life. The credit union helped him escape the cycle of debt he experienced with under-regulated payday lending shops, and—most importantly—gave him a sense of dignity.

“When I came back home, Ms. Urla was the first person who I felt like plugged me back in again,” Barnes recalls. “The first time she gave me a loan, it brought tears to my eyes. I felt like a citizen again—it was like restoration for me.”

Barnes began taking out small loans to purchase equipment for his start-up music business from ECFCU and paying them back—all the while becoming educated on the importance of restoring his credit. Always feeling music was his therapy, he has taken the time to dig deeper into his artistic talents—writing three novels he hopes to turn into manuscripts and composing dozens of songs. It is with help from the credit union that he is in the process of learning how to start his own company featuring his works of art.

Barnes says his primary tasks now is to maintain his good credit and give back to his community.

“I’d rather use my shovel to build something than to dig into a hole,” he says. “I really use my talents now. And, when I have successful sales, I want the credit union to be my home bank. I want to contribute resources back to the church—to the kids. I’m just so grateful to be a member of a credit union that has done so much for me.”