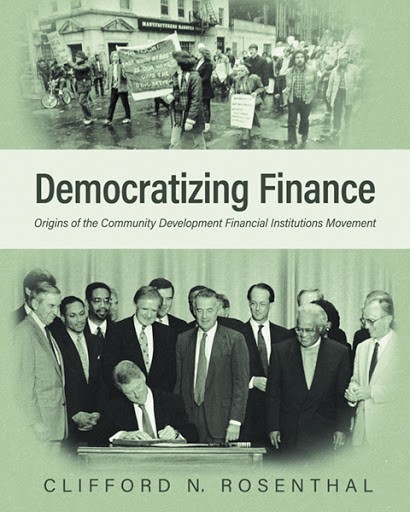 After three years of more than 200 interviews, explorations of the Clinton Presidential archives, and a tour through U.S. history going back to Benjamin Franklin, former Inclusiv CEO Clifford N. Rosenthal has announced the publication of his book, Democratizing Finance: Origins of the Community Development Financial Institutions Movement.

Decades before Occupy Wall Street challenged the American financial system, activists began organizing alternatives to provide capital to “unbankable” communities and the poor. With roots in the civil rights, anti-poverty, and other progressive movements, they brought little training in finance. They formed nonprofit loan funds, credit unions, and even a new bank—organizations that by 1992 became known as “community development financial institutions,” or CDFIs.
​
By melding their vision with that of President Clinton, CDFIs grew from church basements and kitchen tables to number more than 1,000 institutions with billions of dollars of capital. They have helped transform community development by providing credit and financial services across the United States, from inner cities to Native American reservations.

Democratizing Finance traces the roots of community development finance over two centuries, a history that runs from Benjamin Franklin, through an ill-starred bank for African American veterans of the Civil War, the birth of the credit union movement, and the War on Poverty. Drawn from hundreds of interviews with CDFI leaders, presidential archives, and congressional testimony, Democratizing Finance provides an insider view of an extraordinary public policy success. Democratizing Finance is a unique resource for practitioners, policymakers, researchers, and social investors.

For those who shaped the movement as well as subsequent generations eager to learn about its roots, Democratizing Finance recounts a largely untold story.

As a benefit of membership, Inclusiv credit unions in good standing will receive one complimentary copy of Democratizing Finance by mail later this month.