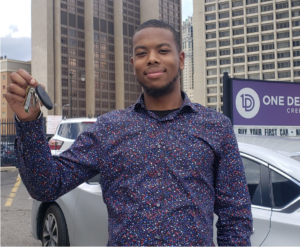 Refi My Ride is One Detroit Credit Union’s auto loan refinancing program, which slashes interest rates in half. On average, One Detroit is able to reduce members’ monthly payments by $54.16, and sometimes by more than $100, saving them more than $3,000 over the term of their loans. That means extra cash for groceries, to put toward a vacation, holiday spending or anything else members might need.

One Detroit’s goal is to put more money back into the local economy instead of into the hands of predatory lenders. In total, One Detroit has financed 1,324 loans for $26 million and helped its members save more than $4.7 million with Refi My Ride.

Refi My Ride was created to help Detroiters who have been cornered into dealership financing or
buy-here, pay-here used car dealers. They promise easy credit, but practice predatory lending. Many consumers visit these dealerships because they are unable to secure financing through traditional financial institutions such as banks. Having a low credit score is one of the main factors that prevents a borrower from securing financing through a traditional financial institution.

More than 23 million Americans hold subprime auto loans, meaning the borrower has a credit score less than 620. Outstanding subprime auto debt now stands at about $300 billion nationwide. Subprime loans are disproportionately originated by auto finance companies, and their share has nearly doubled since 2011.