What is the CDFI Program?

How does the CDFI program work?

The CDFI program was created by Congress in 1994. The goal was to combine federal money with private capital to help qualified financial institutions meet the needs of underserved communities that typically lack access to affordable loans and safe financial services.

How does the CDFI certification benefit a credit union?

CDFIs are eligible to apply for grants from the CDFI fund to expand services to financially underserved communities (capital grants up to $1 million; Technical Assistance grants* up to $125,000 as of 2020)
Any credit union may apply for a CDFI Technical Assistance grant before certification, but they must have the ability to become CDFI-certified within three years of receiving the grant.
CDFIs have access to additional training resources
Membership in a learning community of like-minded credit unions
CDFIs are exempt from the National Credit Union Administration’s (NCUA) member business lending cap
CDFIs have limited exemptions under Consumer Financial Protection Bureau (CFPB) Qualified Mortgage and Ability-to-Pay rules

Will being a CDFI negatively affect my credit union’s business results?

While some credit unions may feel that a focus on underserved communities is just too risky, call report data consistently shows that the median CDFI credit union in every peer group outperforms the median non-CDFI in terms of earnings (return on average assets (ROAA), lending (Loans-to-shares), asset growth and membership growth. Inclusiv has published these findings in two research reports (Inclusive Finance 2018, 2020) and comparable findings have been independently reported by NCUA and CUNA in public presentations.

What is required for certification?

There are 7 tests for CDFI certification, most of which are automatic or nearly automatic for credit unions

Automatic for All Credit Unions (3 tests)

Target Market, which requires that at least 60% of new loans (#, $) are issued in one or more of the following, designated “CDFI Target Markets”:
CDFI Investment Areas: economically distressed geographies designated by the CDFI Fund
Low-Income Targeted Populations: similar to NCUA’s determination of low-income members
Other Targeted Populations: communities that have historically been underserved by mainstream financial institutions, including members who are African American, Hispanic and Native American

What is the deadline for applying?

Is there a fee for applying for a CDFI certification?

No, the CDFI Fund does not charge a fee to apply for certification. If you would like help in completing your certification application, Inclusiv offers affordable CDFI application assistance for credit unions of all sizes.

How long does my certification remain active? 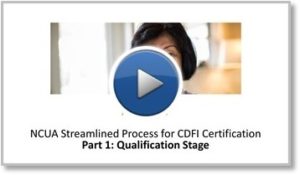 In 2020, the $2 trillion CARES Act and the $900 billion Coronavirus Response and Relief Act included $12 billion in funding for community development financial institutions (CDFIs) and minority designated institutions (MDIs), ensuring resources will be directed to some of the communities hardest hit by the COVID-19 pandemic. On this page are sources of government funding from which credit unions may benefit.

Note: Information about these programs is evolving.