Meet the 2021 Board Nominees

(September 19, 2011 – New York, NY) For many working poor in New York City, and across the country, bridging the gap between generally declining incomes and the ever-higher cost of living is a challenge often met by increasing their consumer debt, typically through credit card debt and alternative, often high-cost, lenders.

Today, at Union Settlement Federal Credit Union, one of the oldest community development credit unions (CDCUs) in New York City, officials from city government, local credit unions, their members, a sponsoring bank, and the National Federation of Community Development Credit Unions (Federation) gathered to announce a new credit union product that demonstrates that responsible lenders in New York City can and do offer alternatives to high-cost, predatory lenders that have become so pervasive in low-income communities across the nation.

Borrow and Save, which will be offered at two New York City CDCUs, is designed to help borrowers break the continuous cycle of borrowing from high-cost alternative lenders and move towards healthier savings habits. 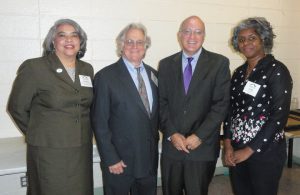 According to Melanie Stern, Senior Program Officer at the Federation, who is in charge of administering the program, “the goal of the new program is to get consumers on the right track to financial health through responsible products that enhance positive financial behavior and builds assets,” she said.

To demonstrate how CDCUs can and do offer affordable alternatives, while also promoting asset building, the Federation, with support from Morgan Stanley, has provided a total of five grants to CDCUs nationwide through the new pilot program, including two in New York City to Union Settlement Federal Credit Union in East Harlem and Love Gospel Assembly Federal Credit Union in the South Bronx.

“Our goal in participating in ‘Borrow and Save’ is to turn people into savers, so that they don’t need to borrow when an emergency expense pops up in the future,” said Audia Williams, CEO at Union Settlement FCU. “It’s a common misconception that low-income people can’t save, and through this product we hope to offer a much-needed product that also incentivizes positive behavior and shows our members that they can save.”

Even in the earliest stages, the new product is making a difference in the community. “I was so glad to have the credit union here to help me with an emergency when my electric bill went to collection,” commented Raphael, a Union Settlement FCU member. “Now I have some money in my savings, and I know that when the loan is paid I will get a bonus payment too!”

According to the Center for Responsible Lending, the primary reason behind high levels of debt with the working poor is the occurrence of unforeseen and unexpected events such as job loss and expenses from medical emergencies. “Predatory lenders often take advantage of these emergency needs by offering immediate access to short-term loans, but at a cost that can exceed 400percent per annum” explained Stern.

A typical $500 small dollar loan at the participating CDCUs requires no collateral, no credit report, is processed within 24 hours or less, has an interest rate of 18%, a fee of $20, and a term of 90 days. By contrast short-term loans from a typical pawn shop, loan shark or internet payday lender have fees and interest equal to $15 per $100 borrowed every 14 days. The net result is that the CDCU payday alternative costs the borrower $40, while the payday lenders’ short-term loan ends up costing consumers $450.

The Borrow and Save product has an added bonus, in that it incorporates an asset building component that requires a portion of the loan go directly into savings, and incentivizes additional saving with a savings bonus to the borrower when the loan is fully repaid. Participating credit unions in New York City and others around the country also couple their Borrow and Save loans with debt counseling and financial literacy as a way to help borrowers become more financially secure.

While New York’s usury cap keeps most storefront payday lenders out of the state, predatory lenders, including internet payday lenders, pawn shops, rent-to-own stores, and loan sharks continue to be a scourge in low-income neighborhoods.

According to Federation President/CEO Cliff Rosenthal, “the Federation has long recognized the deleterious effects predatory lending and related schemes, such as rent-to-own and refund anticipation loans, have in low-income communities, so in 1999, we began placing Predatory Relief and Intervention Deposits, or PRIDEs™, which assume some of the risk to assist CDCUs in making affordable loans in their communities,” he explained. “It is with this combination of experience in targeted investments, advocacy and programming that we are launching ‘Borrow and Save,’ and we are thrilled and thankful to Morgan Stanley, whose funding helped us launch this initiative.”

“New Yorkers benefit from one of the strongest consumer protections -- our State’s interest rate cap of 25 percent,” said New York City Department of Consumer Affairs Commissioner Jonathan Mintz.  “I commend the National Federation of Community Development Credit Unions and its members for developing ‘Borrow and Save’. It is a responsible approach to short term loans that does not seek to overturn the State's long-standing interest rate limit. ‘Borrow and Save’ also encourages participants to save and is an example of a safe alternative to illegal online payday loans. I urge New Yorkers who need financial advice or who may be struggling with debt to visit one of the City’s free Financial Empowerment Centers. Call 311 to find the one nearest you.”

About Love Gospel Assembly Federal Credit Union (LGAFCU): LGAFCU is low income designated federal credit union chartered since 2005, and although still young we are moving and growing. We offer Debt consolidation loans, business and personal loans. We also offer Christmas club and Vacation club accounts and credit counseling. Credit counselors are available to members by appointment to assist them with creating a budget and we offer a free review of their credit report. Members are encouraged to bring in their credit report and a counselor will review it with them and assist them in targeting high interest credit card and loans and suggest methods to eliminate their high interest debt. Credit reports can also be obtained through LGAFCU at nominal cost.

About Union Settlement Federal Credit Union (USFCU): USFCU is a not-for-profit, member-owned financial institution, organized by community leaders connected with Union Settlement Association, a non-profit organization dedicated to enhancing the self sufficiency of individuals and families within the community, and one of the oldest settlement organizations the United States.  USFCU is regulated and insured by the National Credit Union Administration (NCUA), which conferred upon the credit union "low-income designation" for its role in providing financial services to underserved individuals. The credit union was also certified in 1997 by the U.S Department of the Treasury as a Community Development Financial Institution (CDFI), reflecting its provision of financial services, credit and other community development services to a low-income population. In 2000, the credit union was also re-certified as an SBA 7A Lender, which allows the credit union to services women and minority owned business/entrepreneurs.  USFCU’s goal is to provide financial services to all in members including those excluded from traditional services. They are committed to educating their members in the elements of sound financial management and the rights and responsibilities of membership in a cooperative. For more information go to: www.unionsettfcu.org.

About the NYC Department of Consumer Affairs (DCA): DCA enforces the Consumer Protection Law and other related business laws throughout New York City. Empowering consumers and businesses to ensure a fair and vibrant marketplace, DCA licenses more than 78,000 businesses in 55 different industries. Through targeted outreach, partnerships with community and trade organizations, and informational materials, DCA educates consumers and businesses alike about their rights and responsibilities.  DCA’s Office of Financial Empowerment (OFE) is the first local government initiative in the nation with a mission to educate, empower, and protect New Yorkers with low incomes so they can build assets and make the most of their financial resources. Toward that end, OFE seeks to increase access to high-quality, low-cost financial education and counseling; improve access to income-boosting tax credits; connect households to safe and affordable banking and asset-building products and services; and enforce and improve consumer protections to enhance financial stability.  For more information, call 311 or visit DCA online at:www.nyc.gov/consumers.