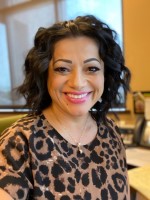 Suzy Fonseca began her career at Lower Valley Credit Union (LVCU) as a teller in 1999. In the 22 years since, she has served as Operations Supervisor, Chief Operations Officer, and President and CEO. She currently serves as President, LVCU’s division of Self-Help Federal Credit Union in Sunnyside, WA.

Suzy Fonseca is a successful credit union leader. Under Ms. Fonseca’s leadership, LVCU’s membership grew from 5,600 to over 18,000; its loan portfolio increased by $74 million, and its total assets increased from $50 million to $150 million. LVCU received its Low-Income Designation in 2013 and became a CDFI in 2014.

Later in 2014, LVCU became the recipient of a Financial Assistance Grant from the CDFI Fund in the amount of $1.65 million to expand consumer lending, education and citizenship development to its Hispanic and immigrant communities. LVCU was recognized by CU Times with the Trailblazer Award for “Outstanding Service to the Underserved in 2014”. In January 2016, LVCU was honored for its commitment to serving the Hispanic market by becoming the first Juntos Avanzamos designated credit union in the Pacific Northwest. In March of 2016, NCUA’s Office of Minority and Women Inclusion (OMWI) certified LVCU as a Minority Depository Institution. In June of 2016, Suzy was presented with a Credit Union Hero Achievement Award by CUNA and CU Magazine. In August of 2016, LVCU become the recipient of the Wells Fargo Next Seed Capital Award and was awarded $100,000 for launching a program that will bring financial services through the medium of an Interactive Teller Machine (ITM) to the community members located in rural agricultural areas. In October of 2016, CUNA honored LVCU with the 2016 Credit Union Excellence in Lending award recognizing Suzy and the LVCU team for inclusion and lending best practices. In late 2018, LVCU became the recipient of their second Financial Assistance Grant from the CDFI Fund in the amount of $600,000 to support deeper lending and development in underserved and immigrant communities.

LVCU was an early trailblazer in design and execution of a very successful citizenship program, supporting thousands of new citizens from the credit union’s local communities.