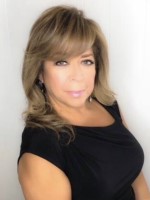 Sue Cuevas was born and raised in Ohio. She majored in accounting at Youngstown State University, also attending Grand Valley State University and lived in Mexico while studying Christian education and finance.

She has over 30 years of financial expertise working in the banking and financial industry. She has taught numerous classes on financial literacy, with a passion to help people understand finance and make savvy decisions.

She also developed a bilingual educational program for first-time homebuyers in Northwest Ohio. Realizing the need to help Latinos establish credit and build financial wealth, she became the first Latina President/CEO and helped start the first Latino Credit Union (Nueva Esperanza Community Credit Union) in Toledo, Ohio. This is the first Latino chartered credit union in Ohio and third in the nation.

She is the newest member of the Northwest Ohio Hispanic Chamber of Commerce, The Latino Alliance of Northwest Ohio, and the Broadway Coalition Committee. Sue is also involved as a community volunteer and serves in teaching financial education to Lucas and surrounding counties.