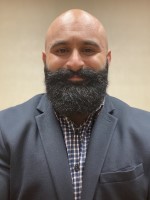 Hector Martin currently serves as the Vice President of Retail Services for County Schools Federal Credit Union in Ventura, CA. As VP of Retail, he oversees branches, accounts, and lending. He has been at this role been at County Schools since December of 2019, with the goal to utilize retail services to better serve the community and the underserved within. As Hector was interviewing for jobs, he fell in love with the credit union motto of “people helping people” and took his first job at a credit union. He has now been serving credit union members and communities for the past 10 years.

Hector is passionate about being involved with the community and other groups that promote advancement and development. Shortly after moving to Ventura, he connected with City of Oxnard Commissioner, Adam Lopez, where he has been able to attend city events and promote financial literacy. He has also partnered with Revive Community Church, where he participates as an advocate for financial literacy and ITIN banking in many of their events, including their immigration forum. As a son of immigrants, it has been emotional and inspiring to be able to give back to these communities.

As an emerging leader, and after not finding a group like this in his area, Hector created his own. He is the Founder and Chairman of the Emerging Credit Union Leaders Council (CA), which was formalized within the past six months and had its first event in July and the second in August. ECULC is a platform for emerging leaders (no matter what age) to come together and bridge the gap between technical know‐how and strategy/leadership. He holds a finance degree from Cal State Long Beach and graduated Western CUNA Management School with Honors. He enjoys learning, networking, and meeting people from all walks of life.