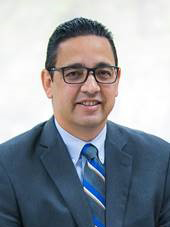 Eddie W. Alicea Sáez is Executive President of Cooperativa La Sagrada Familia, having worked his way up from IT Manager and Director to his current position in 2012. He has over 25 years of experience in banking management, small business development, sales, customer service, and products and loan portfolio management.

In 2018, Mr. Alicea Saez was named President of ASEC Board of Directors (PR Cooperative Executive Association, and also launched the Business Incubator Now program in collaboration with Guaynabo Municipality and Cooperative Development Commission to promote economic expansion and growth of local businesses. That same year he received the Social Responsibility Award from Americas Business Summit in Medellin, Colombia, and was honored by the Puerto Rico Senate for positive contributions toward Puerto Rico’s economy. He has prevously served as Executive Committee member of Cooperative Group Alliance, representing more than 30 cooperatives in negotiations for restructuring the debt of the Government Development Bank. In 2019, he received the ZENIT Award from the Commercial Chamber of Puerto Rico.