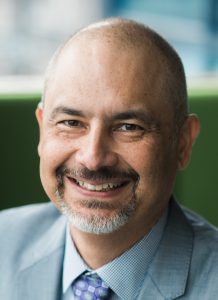 Since joining Seattle Metropolitan Credit Union as President and CEO in 2012, Richard Romero has succeeded in raising the credit union’s net worth by more than two percent. As a result of the credit union’s improved financial position, he has been able to build his team’s ability to provide education and services to Seattle’s underserved communities.

Prior to reaching executive levels, Richard rose through the ranks at financial institutions all along the West Coast – Great Western Bank, Fidelity Federal Bank, Washington Mutual, and Telesis Community Credit Union and Firefighters First Credit Union in Los Angeles. It was along this path he cemented his understanding of retail banking, customer service, and technology.

He has served on several local committees and boards including, the YearUp Leadership Council and Inclusiv of Community Development Credit Unions Board of Directors and Leadership Eastside Board of Directors. In 2015 he received the Desjardin’s Youth and Adult Financial Education Award and in 2016 he received the Crosscut Courage in Business Award, for his work with immigrant communities.