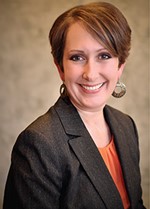 During the Great Recession, Amy played a pivotal leadership role in bringing Point West back from the brink of closure, transforming it to a thriving, values-driven cooperative serving highly underserved markets. In 2016, Point West earned the first ‘Juntos Avanzamos’ (Together We Advance) designation in Oregon. In 2016-2017, Point West and Amy were recognized with four credit union industry awards: the Innovation and Impact Award (Northwest area); as well as the CUHeroes, Trailblazer, and Dora Maxwell Social Responsibility Community Service Awards (National).

Amy’s service extends beyond Point West, with a focus on regulatory and political advocacy regarding consumer protections for marginalized communities. She is a current member of CUNA’s Consumer Protection Subcommittee, and a former member of the CFPB’s Credit Union Advisory Council, with emphasis on small dollar lending. Financial literacy is a core focus of Amy’s volunteer work. She has provided financial education to K-12 classrooms for 11 years, including at-risk youth in juvenile detainment. Amy received her B.A. in Journalism and Communication from Pacific University in Forest Grove, Oregon; and holds an SPHR designation.