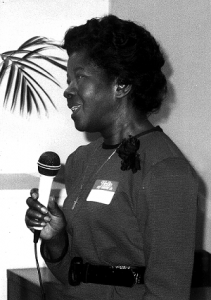 When Annie Wilma Vamper passed away on May 19, 1990, the community development credit union movement lost one of its heroes — and an important part of its history. For more than 30 years, Annie Vamper served in virtually every role that the credit union movement has to offer. Born in Bessemer, Alabama in 1933, she started as a volunteer with the College City Elks Lodge FCU in 1958. By 1962, she began working with the M.C.E. FCU, where she served as manager until 1966.

During the War on Poverty in the 1960s, Annie was recruited to become the Credit Union Coordinator for Dade Economic Opportunity Program in Florida, where she organized, chartered, and trained the staff of twelve neighborhood credit unions. Her work caught the attention of the Bureau of Federal Credit Unions, and she became a Limited-Income Credit Union Specialist for the Southeast Region. She joined the team of Project Moneywise, to promote consumer education and cooperation among low-income people. In 1972, as the nation began to turn away from the problems of the poor, Annie returned to managing a credit union, Coulter Electronics Employees FCU, where she served for 8 years before being recruited again by the National Credit Union Administration.

With the passage of the Community Development Credit Union Revolving Loan Fund, NCUA moved to establish a new CDCU division, and Annie became its second in command. But by 1982, the office was dissolved, a victim of deregulation and the ebbing interest in programs to help the poor. Annie accepted a transfer to New Jersey, where she entered into training to become a field examiner for NCUA. But by this time, her unique skills and interest no longer were valued by the agency. In September 1983, she left NCUA for the last time.

It was then that she came to the Inclusiv, joining its only remaining staff member, Cliff Rosenthal, in the rebuilding Inclusiv. She became Associate Director — and chief financial officer, Capitalization Program staff, regulatory analyst, and “godmother” to half a dozen new CDCUs formed during the 1980s.

Until her death in 1990, she gave every ounce of her strength, her commitment, and her love to the CDCU movement. In 1993, the "Helping Hands" Award was created to honor Annie Vamper’s memory, along with the dedication of Inclusiv’s training center at our New York City headquarters.

Phillip (Phil) Conner joined the credit union’s Board more than 25 years ago Most recently, as Chairman of the Delinquent Loan Committee, he has taken the collection of delinquent loans to new heights, managing to reduce the delinquency rate from over twenty-six percent at its highest point, to nearly zero percent currenty.

Conner attributes his success in this area to taking a more assertive approach to collections. He and his committee work non-stop contacting credit union members directly, sending out notices and letters, and occasionally upon their request, making personal visits to members’ homes or place of business to collect payments.

This high-touch approach has yielded impressive results, and according to LeWana Britt, Treasurer/Manager at the CDCU, “Mr. Conner is one of the credit union’s biggest assets,” she said.

Conner earned his Bachelor’s Degree from Lincoln University in Jefferson City, MO, and holds a Masters Degree in Executive Leadership from Ball State University in Indianapolis. Over the past 38 years he has held several positions with the Defense Finance and Accounting Service Agency of the U.S. Department of Defense, including his current position of Tuition Assistance Program Coordinator.

To all that know her, Helen Godfrey Smith truly lives the credit union philosophy of “People Helping People.” In 1983 she became CEO of Shreveport Federal Credit Union and built the $1.9 million credit union into an $88 million community development credit union operating seven branches, with an eighth branch planned.

While building Shreveport FCU into a formidable economic development force in her region, Godfrey-Smith has also selflessly shared her knowledge with others, traveling throughout the United States and across the globe mentoring credit unions. In addition to her work domestically, Godfrey-Smith has traveled to South Africa, Trinidad and Tobago and other locations outside the U.S., helping credit unions survive and thrive.

In late 2009, she convinced her Board to consider merging a troubled credit union in the impoverished Mississippi Delta Region. With their support, Shreveport FCU merged the First Delta FCU, an historic CDCU founded during the Civil Rights movement in one of the poorest areas of Mississippi. The merger maintained crucial services in a community with few regulated financial institutions. Since taking in that credit union, Shreveport FCU has expanded its service to other parts of the Delta and now operated three branches in Marks, MS; Clarksdale, MS and Batesville, MS. Under her management, the Mississippi credit unions have doubled in both assets and loans.

In 2010, Godfrey-Smith partnered with the City of Shreveport to open a Community Empowerment Center to deliver affordable financial services while offering training, counseling, job readiness and business development to low- and moderate-income residents. The center has been a great success and a second Shreveport FCU Empowerment Center is scheduled to open in Shreveport later this year and a third being planned in the Mississippi area served by the credit union.

Godfrey- Smith served on Inclusiv’s Board of Directors for 8 years, including several years as Treasurer. She is a founding board member of the African American Credit Union Coalition (AACUC), and is Chairman of the AACUC’s Mentorship Committee, which reaches out to credit unions to help develop their business plans and assist with other areas of operations.