Brenda Dominguez, CFO of Guadalupe Credit Union in Santa Fe, NM is 700 miles away from the Pacific Ocean and 1600 miles away from the Atlantic, but she likes to talk about blue oceans—as in blue ocean opportunities.  In a Reaching Out to Untapped Markets workshop at the Federation’s 2013 Annual Conference, Brenda quoted from W. Chan Kim’s book Blue Ocean Strategy, “Lasting success comes from creating ‘blue oceans’: untapped new market spaces ripe for growth.”

Since 2000, Guadalupe Credit Union has grown from a $30 million credit union with 4,800 members to a $130 million institution with 13,600 members.  A large part of Guadalupe’s growth has come from reaching out to unbanked Latinos in Santa Fe, many of whom are undocumented.

“Not everyone was on board at first,” says Dominguez of the decision to work with the Hispanic immigrant community, “but it was a way of giving back.”   Guadalupe’s outreach grew out of a strategic planning session in 2000.  They started with no Spanish-speaking employees, a single Spanish brochure and the Treasury Department approved policy of accepting any non-expired, foreign government-issued photo ID to open an account.  Key to their initial success were the partnerships they formed with Somos un Pueblo Unido and Adelane: Juntos tos Jueves, local community and school groups working with low-income Latinos.  “Relationships and trust are paramount” according to Dominguez; “we did a lot of presentations in the schools, basics like ‘this is how a checking account works’ or ‘why it’s not safe to keep your savings at home’ or ‘this is how much it will cost to pay back a payday loan’. “ 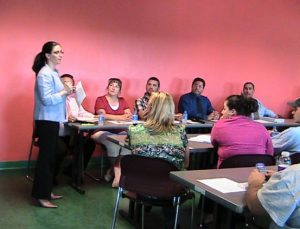 By 2008 one-third of Guadalupe’s business at its main office was conducted in Spanish.  With an overflowing lobby and slow transaction times, Guadalupe needed more space.  With a $70,000 grant from the National Credit Union Foundation, Guadalupe was able to open their Airport Road branch in a community with a majority Latino population in October 2012.  Focus groups helped to establish what products and services the new branch should offer.  Latino customers came to the bank as a family, so play areas for children were added to the lobby.  Banks in Mexico let customers take a number and a seat while they wait for service; adding these features to Guadalupe’s new branch have been so popular that Guadalupe is considering expanding these features to other branches.

Dominguez estimates that one-third of Guadalupe’s FCU growth in the past 12 years has come from their immigrant customers.  The Airport Road branch has 1,678 members with deposit balances of $3 million and loan balances of $8.5 million and a delinquency rate in line with their 3 other branches.  Reaching out to the immigrant population has also led to changes to Guadalupe’s demographic profile with larger increases coming from customers aged 20-40 in their prime borrowing years.  Dominguez, who in addition to her duties as CFO at the Guadalupe Credit Union is also a Federation board member, plans to remain an advocate for serving immigrant communities; it is, as she likes to say, a big blue ocean.